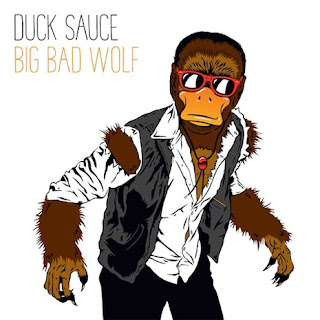 "[The concept behind] "Big Bad Wolf" is pretty simple, and it can mean anything, really, so we wanted the video to have its own narrative," says A-Trak, one-half of the dance duo Duck Sauce, along with DJ Armand Van Helden. "Remember when dance music videos used to actually be creative? Like when you think back to Aphex Twin, Fatboy Slim, and Daft Punk... I don't know why the genre's videos became so generic in recent years."


"When Keith [Schoffield] came up with this idea of "crotchfaces," we just thought it was hilarious," A-Trak continues. "He started coming up with all these gags and describing the characters living in this sort of parallel world, and we were sold. He wasn't sure if we'd be down to play the leads. But our take on this was, if we're going to do this, we need to go all the way. So, we played the dickheads, essentially."
Posted by Matt Horowitz at 12:59 PM