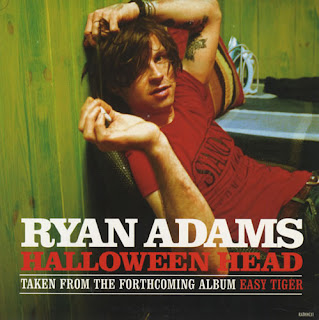 Ryan Adams is one of those dudes that you can never really predict what he's going to do/say next. But not in the same sort of mildly "threatening" way as say, a guy like... Charlie Sheen. But you can always bet that it's going to be unique, fun, and quite memorable - Maybe that's what makes an expectedly "dull" Alt. Country Rocker like Adams so utterly compelling.
Take a look @ Ryan Adams' varied covers selections, for example: Vampire Weekend, Iron Maiden, Alice In Chains, and Oasis. Since first appearing on the music scene in 1991, Ryan Adams has managed to release somewhere between 13-20 studio albums, solo and as a member of assorted bands. (This excluding a gaggle of un-cataloged randomly released tracks and collections.)


Even @ age 36, Ryan Adams seems to have quite the affinity for Halloween; "Halloweenhead" was a stand-out track on Easy Tiger (2007) - The track is seemingly about drug addiction, die-hard fans, and/or holiday candy. In preparation for this year's "All Hallow's Eve" festivities, Adams and model-friend Stella Berkofsky (Balphazar) present: "Night Sweats." This is one of those so crazy/weird-it's-awesome sort of things... seemingly a promo spot for new album, Ashes & Fire. Model dressed as zombie corpse, talking pizza, Death Metal, hand-selected playlist, etc. included within.