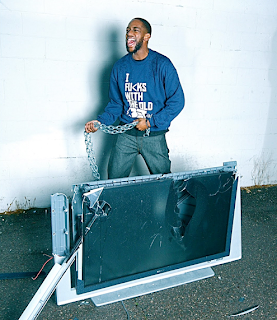 I'd personally like to believe that the nickname "Reallionaire Jream" alludes to the intertwining of real life & The American Dream (millionaire). When I first heard tell of Jerime Shelton's music, I instantly knew it was something that HAD to be shared with the masses... Yet @ that point in time, I was lacking the appropriate means to do so. If I remember correctly, it was back in May of 2010, during The Witzard's formative stages; I recall reading and thoroughly enjoying an introductory post penned by Shake @ 2dopeboyz.
It should be noted that in addition to Shake's contained mp3's, above I have included "I Ain't Ready YET!" one of the stronger cuts... from Jream's 2008 effort - Fresh Cutz: The First Impression. While media-lly in-active over the course of the last year or so, I am now pleased to bring you a Reallioanire Jream update: Long-rumored "The Jraft" (mixtape) is quickly nearing completion, as Jream is earnestly @ work on it's tracks [across the pond] over in England. "Out of Sight" is the second first official preview from said collection. After a few delays, Reallionaire Jream's mixtape will finally see a proper release this upcoming Winter 2010-11. To paraphrase the man himself, prepare yourself for "The thrill of pushing dangerous creativity!.."

Posted by Matt Horowitz at 8:23 PM