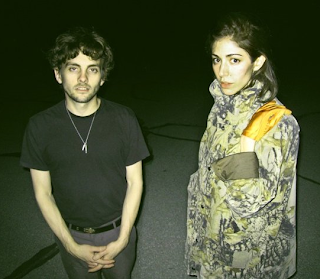 I bet that many of you may be fairly familiar with Chairlift and don't even know it. For example, the Boulder, CO Synth Pop group's 2008 track, "Bruises" was used in one of the initial iPod Nano [Chromatic] commercials. Chairlift have been noticeably inactive since the release of their debut long-player, Does You Inspire You? (2008) and lost a founding member, Aaron Pfenning - Now in pursuit of a solo career as "REWARDS." Chairlift's remaining 2 members have also been focusing on a number of side-efforts, as of late: Songstress Caroline Polachek appeared on Washed Out's recent lead single, "You and I," in addition to Popular tracks from Flosstradamus and Acrylics. Multi-instrumentalist Patrick Wimberely seems to have struck up quite the friendship with the boys of Das Racist; PatrickWHAT produced 5 individual tracks [this including "Michael Jackson"] and went on to Executive Produce the entirety of their debut album, Relax.


Details concerning Chairlift's long-awaited follow-up LP are slowly, but surely starting to emerge. Critics that might point out the fact that Polacheck & Wimberely took their "sweet-ass time" making the record, are advised to sit back and attempt to digest the sheer cinematic over-kill that is "Amanaemonesia." The densely-layered music video was co-directed by Caroline Polacheck along with Tom Hines. A few quick points of conversation include: lime green lady-bodysuit, choreographed interpretive dancing, face-shifting cartoon man [Wimberely?], thumping bass rhythms, and nifty captioned song lyrics. Columbia Records will release Chairlift's Something this coming Jan. 24th. After being recorded and produced between New York-London under the direction of Dan Carey (Hot Chip), the tracks were then sent off to Alan Moulder (Nine Inch Nails) to be mixed/mastered. Additional details are imminently expected to be released shortly; I'm working on dubbing up a little somethin' somethin' with Patrick Wimberely himself... So, without a doubt, be on the look out for that, too!
Posted by Matt Horowitz at 9:25 PM