Chromeo Effortlessly Im·preg·nate a Mess of Pretty Women, "When the Night Falls" 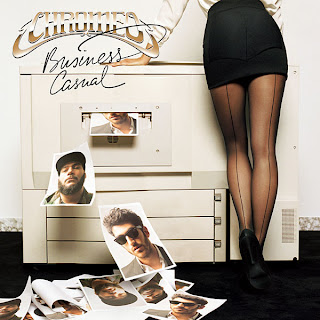 To be TOTALLY "frank," Chromeo is without a doubt one of my favourite up-and-coming, original bands. The Montreal-based Electro-Funk duo made up of childhood friends, Dave 1 & P-Thugg... was kick-started into [musical] motion around 2004. After honing their craft on She's In Control (2004), Chromeo finally managed to break into the mainstream with their sophomore effort, Fancy Footwork. Note-worthy singles from this album include: "Tenderoni," "Bonafide Lovin' (Tough Guys)," "Fancy Footwork," "Momma's Boy," and "My Girl Is Calling Me (A Liar)."
Heading back into the studio for another 3 years, Chromeo managed to self-produced and release Business Casual by late 2010. Since the collection's Sept. roll out, a string of 3 singles have been released, "Night By Night," "Don't Turn the Lights On," and "Hot Mess." Just yesterday morning (August 16th), the music video accompaniment for "When the Night Falls" was unveiled Online.

DANIELS were behind the camera for the shoot, which essentially turned out a very simple and fun, yet compelling music video. Break to a brief/effective synopsis of said clip: "When the Night Falls" starts off with Chromeo performing a gig @ a dimly-lit 80's dive bar. But then... as Dave 1 turns on his guitar, the sheer Electro-Funk that it exudes instantly impregnates a patroness. In no time @ all, the entire establishment is chock-full of pregnant women and Beatlemania-like hi-jinx soon ensue. Even Solange [hook performer] isn't able to slip away from the re-seeding. Are Dave 1 & P-Thugg able to escape all the "Baby Momma Drama" before it's too late..? Make sure to stay tuned until the credits! Chromeo are currently preparing to travell across the nation along with Mayer Hawthorne; The "Night Fall Tour" runs from August 18-Nov. 25 (New York-California).

Posted by Matt Horowitz at 6:31 PM