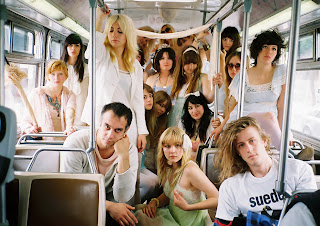 Christopher Owens and Chet "JR" White really are a couple of Girls; No, that's not a sly, back-handed dig... It's the name of their Indie Rock/Pop band. Owens and White are currently on a mini-promotional jaunt for their upcoming sophomore album, Father, Son, Holy Ghost ("Record 3"). Here, they're in fact joined for the first time by new add-on members, Darren Weiss (drums) and John Anderson (guitar).
"Vomit" is the debut single from the collection, which will be released in Europe and US on Sept. 12-13th. After being released for free download last week @ the cost of $1 email, Girls liberated the accompanying "promo music video" yesterday to the Inter-web. Essentially, 3/4 of the nearly 7-minute long track pans across the inner and exterior elements of a 1966 [Ford] Mustang. The convertible cherry red gem is aimlessly driven around town by [Christopher Owens] with the Elvis Costello/The Cure-reminiscent "Vomit" playing in the background. At the very end, as the track abruptly stops, Owens' final destitution is finally revealed... as we see him picking up his buddy, JR White: "What's up? - Alright."