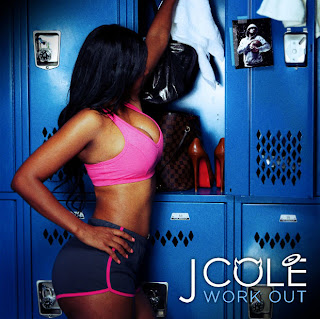 Right out of the gates, starting with the all too familiar refrain: "Straight up, now tell me - Do you really wanna love me forever? (oh, oh, oh)... or is it just a hit and run?" J. Cole then proceeds to layer rhyme schemes between a mashed-up beat constructed from Paula Abdul - "Straight Up" (1988) and Kanye - "The New Workout Plan" (2004). "Work Out" will reportedly serve as the lead single from Jermaine Cole's long-awaited Roc Nation [Jay-Z] debut full-length.
The accompanying clip was in fact the second fully-orchestrated visual set created for "Work Out;" A rough cut of music video #1 (Los Angeles) was leaked and subsequently scrapped back in late July. J. Cole & crew then relocated the shoot to Brooklyn... ultimately filming a completely new music video.


The re-shot "Work Out" footage was soon edited into a music video, which was then released as part of "Any Given Sunday, Vol. 3" (August 14-15). What ensues is a fairly simple video concept: Groupies @ backyard basketball, boy meets girl, prospect of a one-night stand, moral conscience, Frat PARTY... true love? Roc Nation is planning to liberate Cole World: The Sideline Story this coming Sept. 27th. Until then, continue to stay tuned to J. Cole's weekly "Any Given Sunday" release series. The album's next video-single ["Can't Get Enough"] will reportedly feature vocal contributions from both Rihanna & Trey Songz.

Posted by Matt Horowitz at 9:21 PM