Mylo Xyloto: The "Enoxification" of Coldplay? 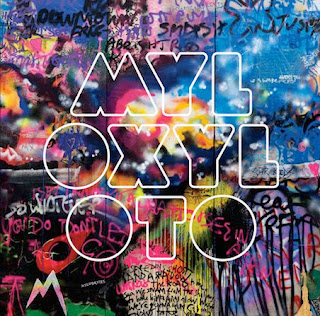 "After headlining Lollapalooza last weekend, British hit-makers Coldplay have announced a release date and title for their fifth studio album: Mylo Xyloto will arrive October 24-25th.
While there's no word as to what the title actually means, graffiti has a major conceptual influence here -- the cover features a collage of various street art -- and it's something they've mentioned in interviews (and espoused in the video for lead single "Every Teardrop Is a Waterfall.") Additionally, a special limited edition [pressing] of the album will include a graffiti-style pop-up book designed by David A. Carter.
No tracklisting was revealed, but the band's been playing a handful of new material in live shows this summer, like "Charlie Brown," which they performed on Jimmy Kimmel, "Us Against the World," "Hurts Like Heaven," and "Major Minus," which they rolled out in Germany, and the aforementioned "Waterfall." [Mylo Xyloto's tracks were produced by Markus Dravs, Daniel Green and Rik Simpson... with Enoxification and additional composition by Brian Eno.]"