"Where 'The Streets' Have No Names"

Above is an old favourite, a track from the Streets' 2004 album, A Grand Don't Come for Free. The storytelling is so vivid, and he's basically complementing and talking trash on this girl at the same time. I think I discovered "Fit But You Know It" on some random SPIN/Budweiser Promo CD. Mike Skinner (The Streets), who also released albums in 2006 and 2008, is gearing up to release his final collection. The "swan song," Computers and Blues is said to be "dark and futuristic." It has a release date of Feb. 7, 2011; I'm assuming that that's the UK date (since it's a Monday), and that it'll be out on Feb. 8 in the US. Another album and/or mixtape, Cyberspace and Reds, is set to be put out sometime before then. Skinner has said that Reds will be "painfully repetitive." Below, we have a track from each.

The Streets - Going Through Hell by Pretty Much Amazing 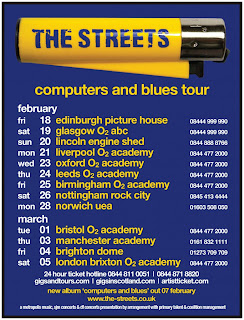 I haven't really gotten into any Streets albums since A Grand Don't Come for Free... But maybe I'll check these "last" 2 out.
Posted by Matt Horowitz at 2:55 PM