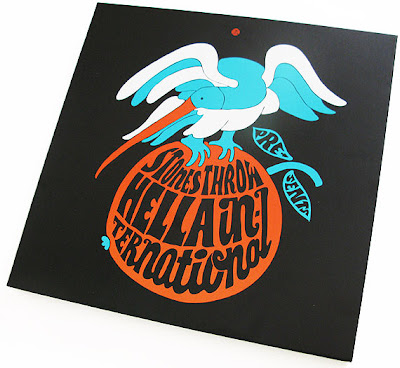 
Stones Throw posted a day or 2 ago that they had "unearthed" some copies of 2008's Hella International 3x12" (Box Set). The release features a collection of artwork created by label friend, Parra and was initially issued to commemorate the '08 Miami Winter Music Party of the same name. It showcased roughly 10 tracks (some along with their Instrumental accompaniments); A few of which were exclusive to the set, with the others later re-packaged on the Chrome Children, Vol. 2 CD.
The remaining copies of the 12"s have now sold out (again)... Hence, Stones Throw is offering up the coveted J Dilla - "The $" (Madlib Remix 1 of 2) as a FREE DOWNLOAD for a limited time only!
Posted by Matt Horowitz at 10:36 PM