"Fight for Your Right (Revisited)" 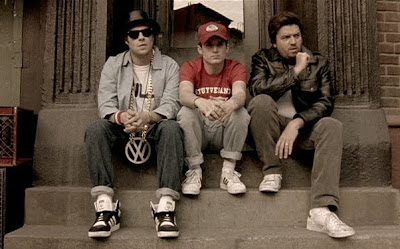 The Beastie Boys' Adam Yauch (MCA) is currently neck-deep in a new cinematic project - A "sequel" to his band's seminal 1987 hit music video, "Fight for Your Right." The short film, dubbed Fight for Your Right (Revisited) , will as its tagline states, chronicle the events "After the boys leave the party." Chock-full of an A-list cast, the MCA-helmed piece will debut at the 2011 Sundance Film Festival (Jan. 20-30) as a part of their Short Film Segment. The meat of said cast will include Seth Rogen (Mike D), Elijah Wood (Ad-Rock), and Danny McBride (MCA). Will Ferrell, John C. Reilly, and Jack Black are also set to appear in unspecified roles. This will definitely be highly enjoyable! Stay tuned in the following months, as more details will indeed slowly emerge.