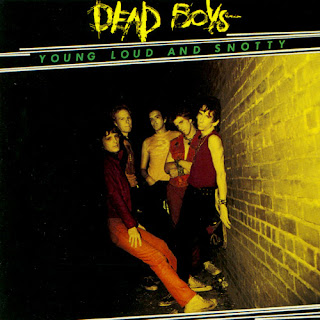 The Dead Boys were a pioneering Punk band from the unlikely town of Cleveland, Ohio. The band was born out of another area band, Rocket from the Tombs in 1976, and they originally played under moniker, "Frankenstein." The Dead Boys line-up consisted of "Stiv Bators" (vocals), "Cheetah Chrome" (lead guitar), "Jimmy Zero" (rhythm guitar), "Jeff Magnum" (bass) and "Johnny Blitz" (drums). The Boys were quite notorious for playing legendary NYC club, CBGB's. Where on more than one occasion, "Stiv" cut his stomach open with a mic stand. The execs at Sire Records increasingly pressured the group to change their "look," so that they'd appeal more to the US "mainstream" market. As a result, after releasing only 2 albums (Young, Loud, and Snotty and We Have Come for Your Children), the Dead Boys disbanded in 1979. In the years since, they've re-formed on a number of occasions and released a few re-issues, live albums, etc. Their legacy on American Punk Rock will always be remembered, regardless of their all-too-short career!

[Track #12 from 2004's To the 5 Boroughs. Notice the "Sonic Reducer" sample repeated throughout.]