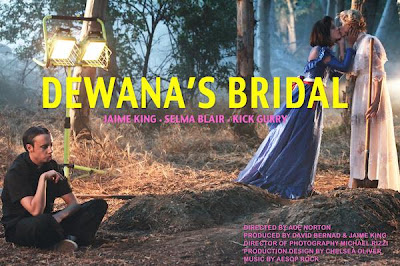 "Take a Titty Out" is the latest effort from San Fransisco's Aesop Rock. It seems to mark a change in style for the Avant [Hip-]Hop artist, as this track is more of a "good time anthem." Best suited to soundtrack THEE [PRE-]PARTY and/or WEEKEND, as well as your next excursion to THEE [STRIP]CLUB.
Aesop's newest track is part of a bigger project - A film score. The film in question being Ace Norton's "Dewana's Bridal." It's cast includes: Jaime King, Selma Blair, Kick Gurrey, Jaime Lynn Sigler, Betsy Rue, and Elena Satine. With the short film finished and mixed down, it's currently being shopped around to various festivals, Rock-composed score and all.
The 2 audio/visual artists previously collaborated back in 2007; Norton directed the music video for "Coffee." Together, they crafted a campy zombie storyline to accompany the John Darnielle (The Mountain Goats)-assisted track. None Shall Pass (also released in 2007) is Aesop's most recent album... Although he's rumored to be releasing 2 projects in '11, in addition to the "Dewana's Bridal" score. 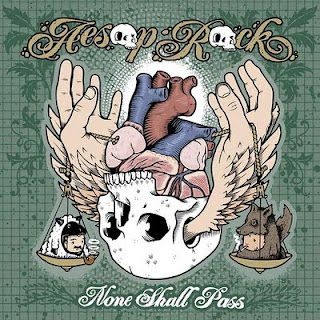 Posted by Matt Horowitz at 2:48 PM