Fucked Up - "The Other Shoe" (Rock Opera) 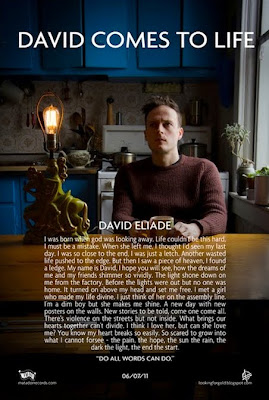 On June 7th, Fucked Up has all intentions of ROCKING YOUR SOCKS! The Summer-time date will mark the release of their long-rumored "Rock Opera," David Comes to Life. The album's title seems to link back to a similarly-titled track from their 2006 album, Hidden World. David Comes to Life is Fucked Up's first full-length since 2008 (this excluding a few albums-worth of 7" singles). The 78:00 album's lead character is named after/for manager and "Fifth Beatle," David Eliade. The 6-piece revealed in a celebratory blog post that they've been actively working on the collection since 2006, meant for it to be their second album... which evolved into "ChemCom," and even spun a handful of tracks [like "David's Christmas" and "David's Plan"] into 7" charity singles.
Frontman Damian Abraham laid out a rough plot outline in a Jan. 19th Pitchfork interview: "It's about a guy, David, who works at a light bulb factory. He falls in love with this activist. She subsequently dies during an accident. You never really find out what the accident is because we couldn't think of it [laughs]. Then David's on trial. There's this prosecutor who was secretly in love with the activist but is also aware that he's in a play. Then it gets really heady and drugged-out."


Matador will release 3 more pre-album singles: "A Slanted Tone" (April 15), "Ship of Fools" (April 26), and "One More Night" (May 3). In addition to these, a companion album of tracks from fake bands that "lived" in the fictitious [late '70's-early '80's] English town will be released on Record Store Day 2011 (April 16). Keep an eye out over @ Fucked Up's Official David Comes to Life Mini-Site for further album-related details.
Posted by Matt Horowitz at 4:40 PM