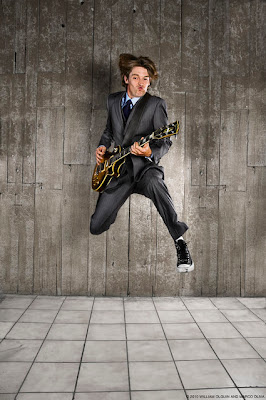 About a year or so ago, a buddy and I went to a Mayer Hawthorne & The County show in the basement of a Philly church (First Unitarian Church). Highlights of the night, Presented by R5 Productions... included a House Shoes (Dilla-based) DJ set, massive amounts of zebra print, a set from delightfully Poppy opener Nikki Jean, many great Mayer-lead "New-Wop" jams, Hip-Hop heads and Hipsters, an impromptu post-show meet-and-greet/signing, etc.
But the most memorable moment of the night was also a completely unexpected one. Mid-way through the main performance, County ax-man Topher Mohr took hold of the lead mic while Mayer stepped back into the folds of the band. The track [which I later learned was called "Ruthless"] was instantly catchy... New, yet "throwback" in the same vein as the Mayer Hawthorne & The County collection.
Soon after the close of the Mazda2 Tour, Topher unleashed "Ruthless" as part of a larger project - That of a similarly-named 5-track collection. 2010's Ruthless EP is [still] available for FREE download over @ A-side Worldwide.


A bit of background info: Prior to becoming part of "Mayer Hawthorne" (Haircut)'s band in 2009, Topher has been earnestly working on his solo music since roughly 2007. That year marked the [self-]release of his debut album, True Love on the TV Set. Around the same time, Topher also contributed writing/guitar-playing chops to Alice Smith's Grammy-nominated Epic album, For Lovers, Dreamers & Me.
Expect to hear new tunes from both Topher (solo) as well as Mayer Hawthorne & The County in 2011. As Topher is currently finishing up Untitled Album #2, and The County will soon join Bruno Mars and Janelle Monáe as part of the "Hooligans In Wonderland [US] Tour" (5/28-6/15). The band will likely release their sophomore album in the coming months, following the trek's end.