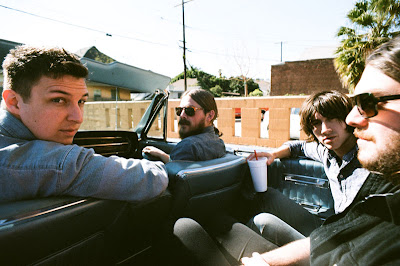 Solid details about the Arctic Monkeys' fourth album are finally starting to emerge. The 12-song set (eloquently titled, Suck It and See) was laid down in late 2010/early 2011 in LA with English musician/producer, James Ford (Simian [Mobile Disco], Florence + The Machine. Klaxons, Peaches, Test Icicles). Ford previously "dubbed sound" for Monkeys LP's #2 and 3.
Out June 6 (UK) and 7 (US), Suck It and See will mark the group's "fif" [read: fifth] full-length album in 5 years. Their Domino discography (2005-11) also includes a variety of EP's, singles, an Apollo concert DVD, the Scummy Man ["When the Sun Goes Down"] short film, numerous limited edition releases, and a one-off 7" under the pseudonym/side-band "Death Ramps."
The album, as a whole, is said to be based in a more "vintage" style than previous Arctic Monkeys efforts. A music video was created for Track # 3, "Brick By Brick" and released online Fri., March 4 as a "promotional single" - debuted on the #ArcticMonkeys' YouTube channel. Said video is fairly interesting.. As it [back]tracks the creation/travel(s) of a vinyl LP.