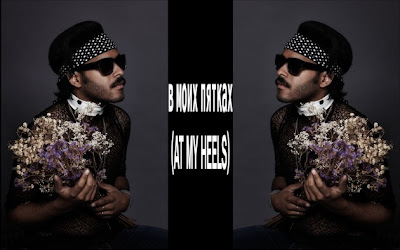 "Twin Shadow challenged us to make a film that was highly diseased, something sick, something bacterially infected, something wrought with viruses. He wanted us to take this film to its last remaining breath, knocking on heaven's door while gasping for air within inches of life, and then REVIVE and REVEAL it to the world. He also wanted us to think outside the browser. Little did we know that we were entering something so stark and so dark. Although it was our first foray into music films and almost certainly will be our last, we look back at the undertaking with a sense of accomplishment and artful wonder.
And it certainly has gone viral. To paraphrase Elvis, who shared our fondness for tigers: "10,000,000 blogs can't be wrong."
"There is no key to my gate" was a challenge for us to go deeper then we had ever gone before. The grand reveal of the Siberian. The arm reveal during the first entrance into the blogosphere. "The Green Face." We COULD go on and on.[..] Each historical moment within this film is forever ingrained in our minds and hearts, and brings us one step closer to opening the "gate" which Twin Shadow eludes to that leads eventually, to the doors of perception.
It should be known that we had initially planned on a shot of George's heels as the very last shot, a controversial achillean ending and a nod to Bergman's "The Seventh Seal" nodding to "The Last Temptation of Christ". The label rejected this idea."

- The Directors (Press Release)
More info over @ the "Official "At My Heels" (The Movie) Website."


"Winner[s] of South Greenpoint Film Festival for "Short Piece."
Winner[s] at TriBeCa Film Festival for "musical visualization in short form."
Nominated at Cannes for "Most Ostentatious Use of an Endangered Species."
Recognized by the Moscow Film Festival for being "Mildly Russian."
Rumored to have been discussed over a beer by Werner Herzog and his confidant."
Posted by Matt Horowitz at 3:52 PM