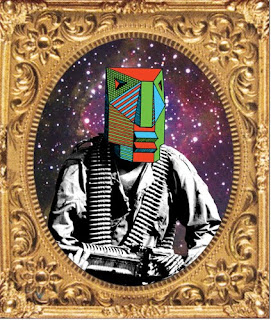 Shabazz Palaces are a mysterious, [fairly-]new Hip-Hop group/collective, hailing from Seattle, WA. Head honcho "Palaceer Lazaro" rose to fame in '90's as part of infamous Jazz Rap/Alt. Hip-Hop act, Digable Planets (then known as Ishmael "Butterfly" Butler). Aside from the fact that they self-released 2 cardboard-housed 7-track EP's around Summer 2010 and are now signed to Sub Pop, little else is known about Shabazz Palaces.
Their most recently-released track is featured above - "an echo from the hosts that profess infinitum." The widget allows for listening/downloading of said track; The first "promotional single" from their full-length debut, Black Up/Black Op? is scheduled to be released through Sub Pop on May 31.
These 2 interviews, pulled from Pitchfork and Seattle Times respectively, will hopefully give a little more insight into Shabazz Palaces. And below is their lone music video/short film, "Belhaven Meridian." A piece who's origins (discography-wise) I'm not entirely sure of.

Posted by Matt Horowitz at 1:07 PM