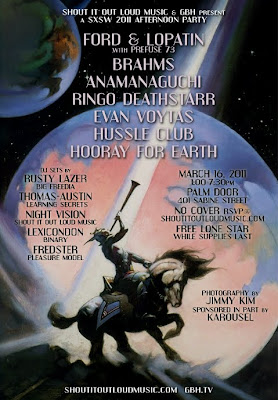 Ford & Lopatin [the artist(s) formerly known as, "Games"] are already looking to be one of 2011's "Best New Artists." Childhood friends Dan Lopatin and Joel Ford "formed" Games/the latter name-sake back in '94, focused on other projects - Oneohtrix Point Never/Chuck Person, Tigercity, Airbird - for about 10 years, and decided to [re-]collect in Feb. 2010 to finally craft a set of tunes.
After releasing a blog-hyped 12" EP, Games... That We Can Play, on Hippos In Tanks (Nov. 2010), the group was mysteriously "forced(?)" to change their name. Soon re-emerging as "Ford & Lopatin," simultaneously announcing the formation of a Brooklyn-based "Electronic music company specializing in Digi-Psych, CDM [Contemplative Dance Music], "Popular Noise" and other sounds" - Software. Some additional info on the young label is available within this recent Altered Zones-Dan Lopatin interview.
And then yesterday, Ford & Lopatin unleashed a short, sample[r] "video" for their upcoming, Software/Mexican Summer debut LP, Channel Pressure. A release date of June 7th has been set... with segments of the Prefuse 73-mixed collection now available for your listening pleasure and additional details TBA shortly.

Posted by Matt Horowitz at 6:59 PM