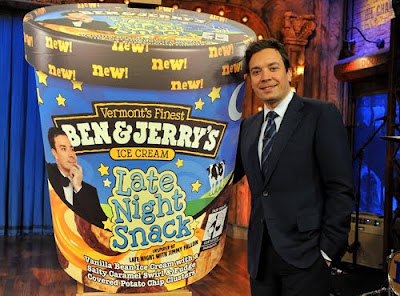 The March 2/3 episode of "Late Night with Jimmy Fallon" [officially] marked the namesake's Second Anniversary. Since beginning his NBC run in 2009, Fallon has been joined by house band The Roots and MC/announcer Steve Higgins. Many great guests have made appearances, memorable skits/games created, and landmark musical performances have taken place.
Guests on Episode #404 included Abigail Breslin, Mike Tyson, and Motörhead, along with a "Slow Jam the News" appearance from Brian Williams. Fairly early into the night's show, Ben and Jerry (yeah, THAT "Ben & Jerry") rolled a cake out onto the stage floor.
Ben and Jerry proceeded to deliver an announcement - A new featured ice cream flavor, "Late Night Snack." A pint of the new concoction consists of vanilla ice cream, caramel swirls, and crushed up kettle chips covered in chocolate fudge. Crafted in a true collaboration between the Late Night crew and the ice cream team, it all started out with a Summer 2010 skit - "Ladysmith Snack Mambazo." 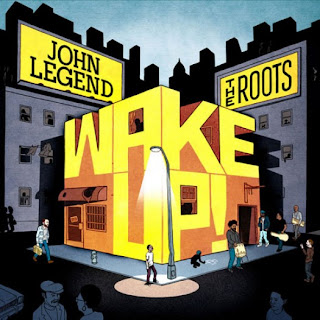 Posted by Matt Horowitz at 8:38 AM