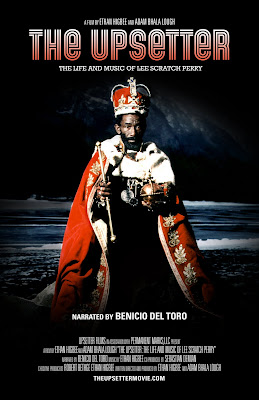 "THE UPSETTER tells the fascinating story of Lee "Scratch" Perry, a visionary musician and artist from poor rural Jamaica who journeyed to the big city in the late 1950s with dreams of making it in the burgeoning record industry. Lee Perry burst on the scene with a brand new sound, inventing a genre of music that would come to be called "Reggae," while mentoring a young Bob Marley and gaining international recognition as a record producer and solo artist. ["Pipecock Jackxon" would later go on to work with artists as varied as The Clash, Beastie Boys, Andrew W.K., Paul McCartney & Wings, Moby, and Sasha Grey.]
THE UPSETTER charts 70 years in the life of Lee "Scratch" Perry in his own words through an exclusive interview given to American filmmakers Ethan Higbee and Adam Bhala Lough in Switzerland in 2006. It is equally a documentation of 30 years of Jamaican music and culture as it is a study of one of the most creative and inspiring human beings of all time. The film is narrated by Academy Award winner Benico del Toro."
- Courtesy of Hypebeast, by way of THEUPSETTER-movie.

Posted by Matt Horowitz at 8:49 PM