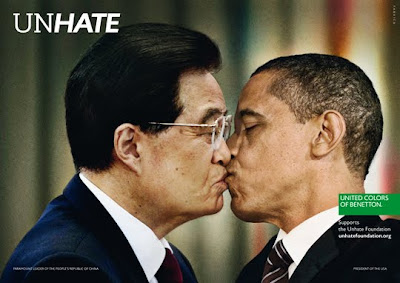 "What does UNHATE mean? UN-hate. Stop hating, if you were hating. Unhate is a message that invites us to consider that hate and love are not as far away from each other as we think. Actually, the two opposing sentiments are often in a delicate and unstable balance. Our campaign promotes a shift in the balance: Don't hate, Unhate."

The UNHATE communication project includes a series of coordinated initiatives and events, starting on 16 November in the main newspapers, periodicals and websites around the world. The central theme is the kiss, the most universal symbol of love, between world political and religious leaders, such as: Barack Obama and Chinese leader Hu Jintao; Pope Benedict XVI and Ahmed Mohamed el-Tayeb, Imam of the Al-Azhar mosque in Cairo; The Palestinian president Mahmoud Abbas and the Israeli prime minister Benjamin Netanyahu. These are symbolic images of reconciliation - with a touch of ironic hope and constructive provocation - To stimulate reflection on how politics, faith and ideas, even when they are divergent and mutually opposed, must still lead to dialogue and mediation.

"The film UNHATE by French director Laurent Chanez, tells of the precarious balance and complex interweaving between the drive to hate and the reasons to love. It is built on a crescendo of deliberately ambiguous images: Eyes flirting or glowering, people embracing or fighting, insurrections or celebrations, brawls or wild dancing. Extreme moments of conflict or love: Two fighters after a round, a couple who have just made love... or perhaps this too was a battle. The film will be available for viewing on the UNHATE, benetton.com, and YouTube websites, as well as in top cinemas."

Posted by Matt Horowitz at 2:10 PM