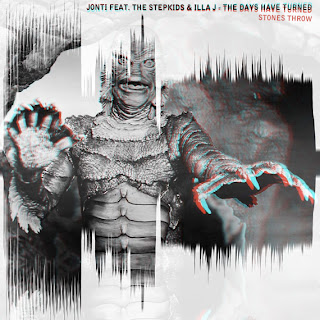 Lots of interesting activity over @ Stones Throw today, Nov. 21. Sounds like The Stepkids Tim Walsh, Jeff Gitelman, and Dan Edinberg have been quite the busy cats lately. Whether it be laying down unintelligible vocals with Jonti & Illa J [above] or pumping out singles from their STELLAR self-titled debut. The Stepkids Album is without a doubt a dense, multi-layered musical journey... prepared by 3 extremely talented session musicians, now front and center - Finally in the limelight!


"Suburban Dream" is in fact, The Stepkids' third official music video; As it's essentially the follow up to both "Legend In My Own Mind" and "Wonderfox." This most recent video was directed animated by Chris King and really teeters the line between the previous videos' sense of surrealism/realism. Throughout the course of "Suburban Dream" we follow a down-on-his-luck young fellow as he wonders through the city, stumbles into a speakeasy, gets roped up with some gangsters, and let's just say goes on a long "trip." All the while, King's background animation is top-notch; A stark contrast to the main character's pencil-drawn physique. The Stepkids self-titled debut is now available on Stones Throw.
Posted by Matt Horowitz at 6:14 PM