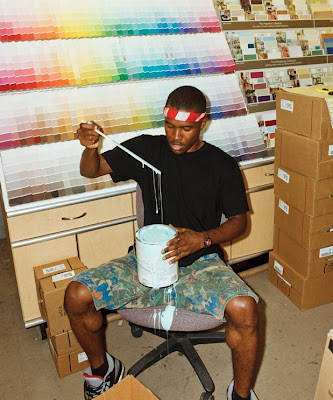 Frank Ocean is by far the most restrained [musically talented, for that matter] and commercially accessible member of Odd Future. While his overall subject matter is still pretty messed up, it's more in that suave D'Angelo-Teddy Pendergrass type of way. It has yet to be seen if Ocean's public affiliation with the crude and rowdy OF sect will help or hurt his musical career. Frank Ocean is more like Redman anyways; Who was never really a legitimate Wu-Tang member, but without a doubt always considered a pivotal element of the group. A true vigilante of a "businessman," Ocean self-released his debut album Nostalgia, ULTRA online back in mid-Feb. (2011), while Def Jam continued to slack.


Needless to say, the label execs. and [female] fans alike are now latching onto his every word. Frank Ocean is currently holed up in the studio, putting the finishing touches on his premier major label release. @ press time, Ocean has played roughly 3-5 live shows and is steadily booking more and more. All the while, Frank Ocean has somehow managed to find time to allot towards his budding singer-songwriter career. Recently penned tracks were secretly passed off to the likes of John Legend, Beyoncé, Justin Bieber, and Brandy.
2 Ocean-penned tracks were even further laced up with featured vocal hooks and included within Jay-Z & Kanye's recent Watch The Throne project. "Thinking About You" was seemingly written for Bridget Kelly (Roc-Nation) and then re-recorded by Frank Ocean himself. Where Ocean's version will end up is currently unknown; Earlier this very week, SBTRKT released his own edit of "Thinking 'bout You" [above] - The man named Aaron Jerome created the remix "whilst on tour... not mixed or official."
Posted by Matt Horowitz at 5:26 PM