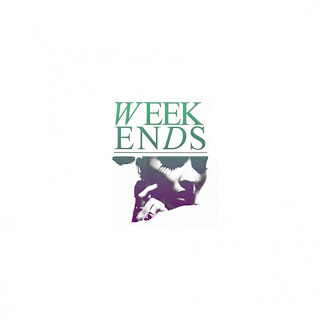 I would imagine that a band like Weekends are held very much so in the same public regard as say, Pavement or Nirvana back in their 90's heyday(s): The band's overall musical ability [or lack thereof] doesn't exactly seem to measure up with their ever-growing level of success and critical acclaim. With that said, Weekends is simply made up of 2 multi-instumental cats hailing from Baltimore, Maryland's thriving "art scene" - Brendan Sullivan and Adam Lemple on rotating Guitar/Vox/Drum duties. Both gentlemen are active solo artists, graphic designers, writers, photo-journalists, members of alternative bands, etc. as well. Personally met Weekends @ First Unitarian Church, Philly gig with Surfer Blood last summer; They proceeded to offer me FREE beer and malt liquor when we officially met in the "green room" [church pews]. I can attest that they're truly some cool-ass, hard-working dudes!


Since forming around 2008-09, Weekends have managed to record and release 2 full-lengths and 2 EP's: "Weekends," Suburban Dome EP, Swim City EP, and Strange Cultures. After self-releasing a collection CD-R and inking a few ill-fated record deals, Brendan & Adam are now singed to Baltimore's very own Friends Records. Top-notch bro [good friend], Brett Yale runs the label and has managed to press Weekends' latest release (Strange Cultures) in a number of various formats: vinyl record, cassette, CD, mp3 download. Following a number of unfortunate delays, all of the above formats are now available for purchase @ Friends Records.
Even while holed up in a New York-based studio, busy mixing down their upcoming release, Weekends are still somehow actively promoting Strange Cultures (2010). Only preceded by Alice Cohen's "Totem" (Winter Version), "Roommate" b/w "Raingirls" (short) essentially serves as singles 2-3. For all intensive purposes, the dual-music video is a performance piece, albeit broken down into 2 distinctive segments: Facepainted Copycat Theatre Troupe "abduction" and claymation "live show," respectively. While Weekends LP #3 AKA "New Humans" is imminently nearing completion and should be expected soon than later... a print interview and [3] audio-file samples can be viewed/heard in the meantime.