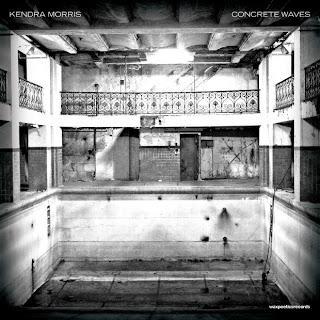 "Concrete Waves" is just one of those songs that's wildly catchy right off the bat! You know that you like it. But also know that you'd really be hard-pressed when asked "Why?" Kendra Morris is poised to become the next short-term Queen of Soul Pop Music; A genre initially spearheaded by the late-great, Amy Winehouse. Since "Throwback Soul"'s early-mid 2000's inception, many young songstresses have decided to jump aboard: Lily Allen, Duffy, Ke$ha, Sharon Jones, Janelle Monáe, Adele, Miss Jack Davey, Lana del Rey... and now, Wax Poetics' very own Kendra Morris.


Kendra Morris was born and raised along the coast of Florida to 2 musically-inclined parents. So, it was frankly no surprise to anyone that she grew up to be a Soulful-voiced little young lady. Morris made "The BIG Move" to New York City around 2003, where she proceeded to record bedroom [closet] recordings onto an 8-track. Those very recordings would result in 2 early, self-produced formative EP's. The modest efforts of Morris' team-up with fellow musician-producer, Jeremy Page would go on to produce the recordings housed on Kendra Morris EP.
It seems as though that third EP managed to somehow get the attention of the record execs. over @ Wax Poetics (vinyl magazine); A deal was soon inked and Kendra Morris was quickly signed to newly-formed Wax Poetics Records. Her debut long-player is expected TBR in Spring 2012. A limited edition press (1,500) of "Concrete Waves"/DJ Premier 320 Remix 12" is now available for pre-order @ Wax Poetics Shop. Included within that very package is state-of-the-art Serato Control vinyl software. Expected 12" Release Date: Dec. 6, 2011.
Posted by Matt Horowitz at 7:32 AM