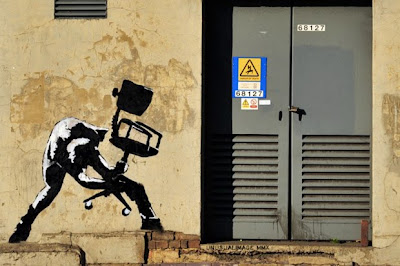 I don't know how this slipped by me. - I guess because I haven't watched The Simpsons in years, and because Banksy's "career" is somewhat hard to follow. From what I can gather, this intro aired along with the Oct. 10th episode (#22.3, "MoneyBart"). I haven't seen the episode, and I don't know how the makers of The Simpsons even got a hold of the ever-illusive guerrilla graffiti artist, but this really is a Pop Culture staple of 2010. It seems as though a casting director got in touch with Banksy through the producers of his recent film, "Exit Through the Gift Shop." [Check out the NY Times interview: http://artsbeat.blogs.nytimes.com/2010/10/11/the-simpsons-explains-its-button-pushing-banksy-opening/]. He then storyboarded and laid out his take on the opening scenes. Said intro is very dark, funny, and somewhat confusing.. But classic! I'd be interested in seeing further Banksy x Simpsons collaboration(s) in the not-so-distant future!
* Above and below, are 2 new Banksy pieces, spotted on the streets of London; One, a homage to The Clash's 1979 album, London Calling. The other, a send up to the other Matt Groening-helmed Fox series, Futurama. 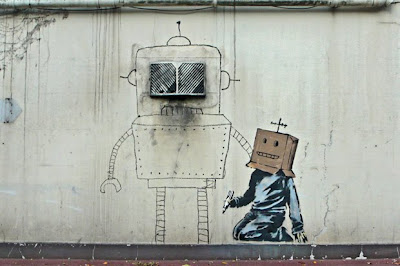