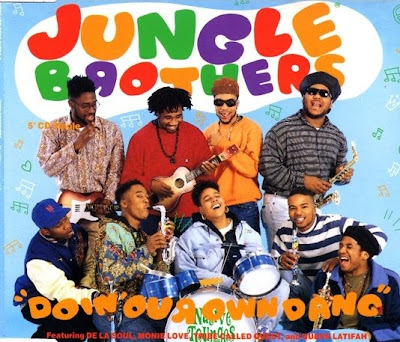 Native Tongues is/was a Hip-Hop collective formed in the late 1980's and based on the simplistic ideals of peace, love, and happiness. Its founding members were a configuration of the groups A Tribe Called Quest, Jungle Brothers, and De La Soul; All like-minded, goal-oriented, aesthetically-similar, positive artists. In an age of highly-publicized and violent East/West Coast feuding, Native Tongues were miraculously able to supersede with "flying colors!" Other flagship members and affiliates include: Black Sheep, Queen Latifah, Leaders of The New School (Busta), The Soulquarians (J Dilla, Mos Def, Common, Talib Kweli), Prince Paul, Monie Love, and Chi-Ali. For those interested, Discogs is currently hosting a near-complete list of "Native Tongues Collaborations" [output] from their most fruitful era.


As told in a section of Michael Rapaport's new documentary ["Beats, Rhymes & Life: The Travels of Tribe"], Q-Tip recounts the tale of the group's mysterious name-sake... It goes a little something like this: One fine afternoon, Kamaal was @ Afrika Baby (Jungle Brothers)' pad crafting a FRESH beat. Making good use of a COLD HARD vocal sample from The New Birth, "Took away our native tongue." The long-unknown vocal sample ["African Cry"] was recently re-dug by Aquaboogie06 over @ Slang Rap Democracy. Thanks for sharing the knowledge, my wordsmith friend! Rapaport's Beats, Rhymes & Life is now seeing a limited nation-wide release; Catch it while you can, for a limited time @ a participating theater near you!
Posted by Matt Horowitz at 3:03 PM