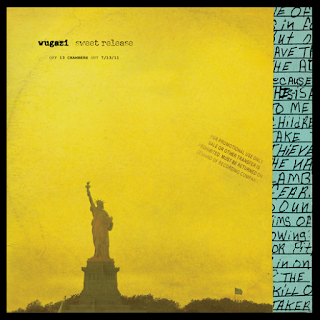 The 2 basic ingredients of the "WUGAZI recipe" are equal parts Wu-Tang Clan and Fugazi - For all intensive purposes, 2 of the most influential artists in their respective genres of Hip-Hop/Punk. Amongst the first crop of bands I really got into as an angst-filled teenager, Fugazi and Wu-Tang have remained personal favourites over the years... My love and understanding of their music growing with age. Cecil Otter and Swiss Andy seem to have a similar appreciation for "The Godfathers" [of Hip-Hop/Punk]. Joining forces and dubbing themselves "WUGAZI," over the past year or so, the 2 managed to "cut up every imaginable Fugazi record and trying out every Wu-Tang a capella they could get their hands on." Look for the full project ("13 Chambers") TBR next Wed., July 13, 2011.


As I had previously speculated last week's [debut], it has been revealed along with Leak #2, that the masterminds behind WUGAZI are in fact, Cecil Otter and Swiss Andy; The pair originally met in their home city of Minneapolis, MN... Cecil is a member of Doomtree [collective] and an affiliate of Atmosphere, GAYNGS, and P.O.S. Active as both an MC and producer, Otter has contributed to 12 or so Doomtree-related releases and has released 2 solo projects (Rebel Yellow, False Hopes 7). He is currently working on a follow-up album, "Porcelain Revolver" and a collaborative project withfellow producer, Lazerbeak. There is little or no information available online concerning the whereabouts of Swiss Andy... As this was pulled from the WUGAZI Bio: "Swiss Andy is a musician & producer [who has contributed] to several bands including The Millionth Word, Field Guide, and The Swiss Army. He is currently working on a Remix of Rebel Yellow." #wugazi