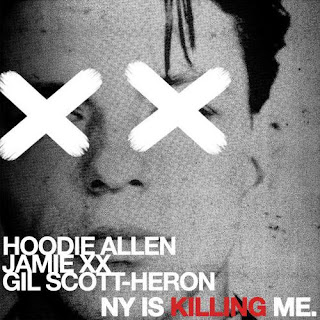 Hoodie Allen was in fact raised by wolves. After a few years inheriting hunting & gathering skills, Allen became a Rapping Teenage Werewolf at the tender age of 15. born one Steven Markowitz ["Steve Witz"] in New York City, 1989. Raised in a Jewish household on Long Island, Hoodie was always drawn to both Hip-Hop/Indie and then attended UPenn. Since quitting his job @ Google and committing full-time to music-making in 2009, Allen has released a size-able amount of tunes - Even garnering a Hype Machine #1 single with "You Are Not a Robot" (Marina & The Diamonds).


So, Hoddie was gracious enough to let us ask him a few questions... concerning Pep Rally, his upcoming mixtape (Leap Year), and even The Office.
Very cool of you to take time to talk to us - So, here we goooo!
Question 1: When I listen to your songs and hear the samples you use, I'm often reminded of Chiddy Bang. You recently shared the stage with them at Bamboozle (in April), how was that?

It was a good time, we've actually had a few shows together -- They bring a lot of energy!


Question 2: Would you say that Chiddy Bang has influenced you in any way? What would you say are your musical influences? Does Woodie Allen have much influence over you other than a play on his name?

Nah, I've been making music since I was 13 years old. My influences are groups like OutKast, Little Brother, and Beastie Boys. I try to really only focus on what I'm doing as far as contemporary music goes.


Question 3: You worked at Google coming out of college. What made you wanna leave there and pursue a career in music? Was it harder than you had expected?

Music is my passion and you only get one shot in life. So, I made the decision to go all in.


Question 4: On your Twitter (@HoodieAllen) you mention "Two big announcements" coming in the next couple days. Do these have to do with the release of your new mixtape (Leap Year)? Or possibly signing to a record label?

It has to do with new music for sure.


Question 5: You sample a lot of good Indie Rock... with my favorite being "Swimming With Sharks." How do you determine which song would be best to sample? Do you get your lyrics down first or do you hear the song you wanna sample first than go from there?

I just listen to a lot of Indie and Pop music and often times, I'm inspired to re-invent something that sounds special.


Question 7: Ever been put in the "Friend Zone"?

Absolutely, I think we all have at some point haha.


Question 8: Who should be the new manager on The Office? I personally say Jim.

My man Andy Bernard ALL THE WAY!


Well, thanks for taking the time to talk to us, man! We REALLY look forward to hearing Leap Year... Keep up the good work!


Much thanks goes out to Pat and Hoodie Allen alike! Follow Patrick Meehan on Twitter @Pllllat. Hoodie can be reached (via Social Mediums) @ either wearehoodie YouTube Channel, HoodieAllen * Soundcloud, hoodieallen.tumblr, @HoodieAllen (Twitter), and Facebook; ALL OF his previously released works are available for FREE download @ Facebook - 1 mixtape, 2 singles, and 1 EP. Be on the look out for Allen's next project (Leap Year), TBR very shortly!
Posted by Matt Horowitz at 10:39 AM