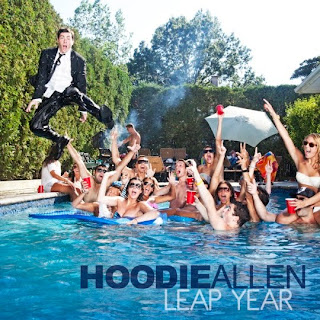 For all intensive purposes, this is a "follow-up post" of sorts. What, you ask is it in fact following up? Show of hands - Anyone recall the "Real Talk with Hoodie Allen & Patrick ("Pllllat") Meehan" Interview posted roughly a week or 2 ago? Hopefully it's been picked up on by now... But the centerpiece of THIS post is actually Leap Year. Yes, that's the mixtape that Hoodie Allen spoke of during the interview segment with Mr. "Pllllat" Meehan.
Leap Year was quietly "leaked" to Soundcloud @ 12pm of July 26th. I think Hoodie himself captured the important, yet fun-loving "Summery" vibe of the album in a recent [pre-release] blog post: "i'll be real with you... i haven't been sleeping well. i'm just so anxious/nervous/excited to release [leap year] on tuesday. it's been about 6 months in-the-making. i feel like i've put my whole soul into the record and definitely leave myself pretty exposed to criticism both personally and musically. worried about how some special records will be received. but i also know that i 100% believe in it and that's also exciting... maybe i'm just nervous that there are only seemingly 2 results after releasing it. (1.) it exceeds my expectations, and my life starts to become [legitimately] different... or (2.) it's underwhelming and i feel like i'm trapped in a rut. either way, i'll be looking at a different world for myself and that's always an interesting crossroads to be at."


* After surfing a bit through today's Twitter News Feed(s), I learned that @HoodieAllen was in the process of tallying tumblr, Facebook, and Twitter comments... in an effort to determine the Top 3 Fan Favourite Tracks. The count ended up showing that "#WhiteGirlProblems," "James Franco," and "Song for an Actress" were indeed the front-runners. Hoodie said that he will, in turn, create music videos for Leap Year's assorted tracks... based off the numbers above. ["I think I'm gonna try to make as many videos as possible for Leap Year. Maybe I should make a movie."]