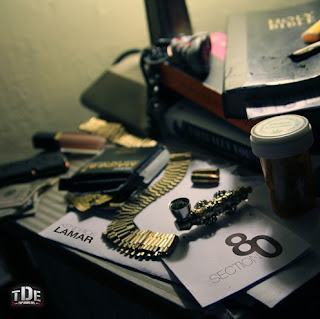 On paper, Kendrick Lamar sounds more like Simon & Garfunklel than a budding 23-year-old Compton rapper: Kendrick lives his life sans weed, gang interaction, and gunplay... "straight A" high school student, he tells of social/political commentaries through song (rap), plus Mr. & Mrs. Lamar are still happily married. Bursting onto the Underground Hip-Hop scene in 2003 and subsequently releasing 3 honorable mixtapes under the nickname "K.Dot," the aptly-named Kendrick Lamar EP was then released in 2009. In Sept. of the following year, O(verly) D(edicated) mixtape was released and met with much critical/fan praise.
Following numerous 2010-11 guest appearances, rumblings started circulating that Lamar was shaping up his debut offering - a "street album" [refined mixtape]. Over the span of a few months, 5 lead-up singles from #Section80 were slowly leaked out to the masses. Short reviews of the 5 tracks are featured down below... with "Ronald Regan Era" and "Tammy's Song," in particular, showcased above/below, respectively. #Section80 was made available for $7.99 on iTunes [US-UK] @ the stroke(s) of midnight Sat. July 2.


Track #2: "Hol' Up" - Liberated by Dave @ Top Dawg Ent. in the final days of June, "Hol' Up" really is a simple composition; Built atop a simple Soundwave-crafted horn sample and lingering, weaving drum pattern... Kendrick slinks in and out of the pockets, making sure to dodge the [female] "Da da da" hook. The smooth, fine balance was EQ'd and mixed by Ali. And then before you know it, the track abruptly ends, just shy of the 3-min. mark.

Track #5: "Tammy's Song" (Her Evils) - Promo Single #5 of 5 and it's accompanying clip was debuted over @ Drake October's Very Own (OVO) in the early-morning hours of Fri. July 1. The overall vibe of the music video matches the sparse, stuttering beat of the track. Sub-titled (Her Evils), "Tammy's Song" seems to be one in a string of character trait describing tracks... which might add up to some sort of running album arc/concept.

Track #7: "Ronald Reagan Era" (His Evils) - "A mutual friend said he was diggin' the music, and he blessed me to get these [RZA a cappella vocals]. I was sittin' on them for a while, like, "Damn, I got some RZA joints up in my hard drive. That's incredible!" So, I didn't want to touch 'em just yet unless it was right. So, I was sittin' on them for a while, then I was like, "You know what? This is the perfect sound right here." My dude Tae Beast did the beat, and it came together, man. It was magic!"
Kendrick told MTVNews' Rob Markman. 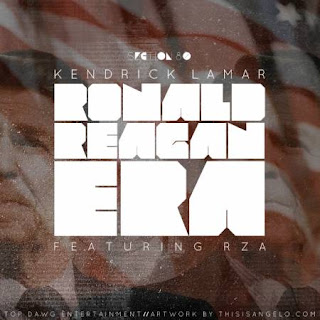 Track #16: "HiiiPoWeR" - The initial offering of the set, produced by J.Cole, and essentially the #HiiiPoWeR Team mantra. This is the debut track from Kendrick & J.Cole... As they're currently preparing beats and rhymes for a collaborative mixtape, which will be released after "Cole World" (Sept. 27). Watch the accompanying Fredo Tovar & Scott Fleishman-directed music video.

"Sex with Society" - Centered around the odd yet repeating refrain, "Life's a bitch... But I'ma keep the pu$#y wet," this piece is laid over a sparse, creepy beat. While NOT featured on #Section80, this track seems to set the tone for newbies of Kendrick's sound and even sets the stage for the album. Very well done stab @ a promotional/teaser single, via THC prod.