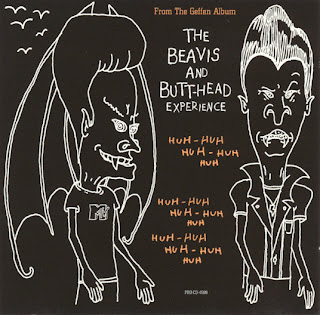 * White Zombie - "I Am Hell"_CD Single
It was the year "1997" - a brisk November day, in fact... A sad day for television, Pop Culture, and the world alike; For unknown reasons, MTV had cancelled [The Chronicles of] Beavis & Butt-Head. After an honorable 200 episode run, "America's Favourite Idiots" were now cast off into the oblivion of space/time. Series creator, Mike Judge then got involved in a number of mediocre [in comparison] projects: Daria, Airheads, King of The Hill, Office Space, and Beavis & Butt-Head Do America, as well as minor "acting roles" and cameo appearances.
Fast-forward to the present (Summer 2011): After years of desire-filled rumblings, the MTV Execs. have finally fished their heads of out their asses... Resurrecting Beavis & Butt-Head from the dead! While details are still scarce, it seems as though Judge has grown tired of King of The Hill - A show which in all honesty, has seen its better days.


FRESH Beavis & Butt-Head (2.0) episodes are scheduled to premier during MTV's Fall 2011 Line-Up [October]. The 2 teenagers will remain the same age that they were during their original run... nearly 15 years ago! Since then, they've been come even more size-able "Pop Culture Icons." Instead of giving their opinions on Popular 90's music videos... This time around, Beavis & Butt-Head will riff about Jersey Shore, Lady GaGa, UFC fights, amateur YouTube videos, review current movies, and knock more of MTV's own staple programming.
The nearly 5 minute-long preview gloriously featured above was unveiled by Mike Judge himself @ this year's annual Comic-Con (San Diego). Titled "Holy Cornholio," the selected episode scenes... which are executed in Judgemental Films' signature "sketchy" style, house a number of classic hi-jinx. - "Beavis screwing his hand" with a G.I. Joe and the resulting ER trip. As Beavis & Butt-Head aimlessly wonder through the hospital halls, they run into new parents, whimpering "cripples," and even cloaked members of a cult. As Beavis morphs into "The Great Cornholio" [from prescribed drugs], the cult mistakes him as their new messiah. They then stock-pile massive amounts of TP for his bung-hole... Stay tuned to Your Local MTV Network! - OCTOBER '11, KIDDIES!!!

Posted by Matt Horowitz at 5:03 PM