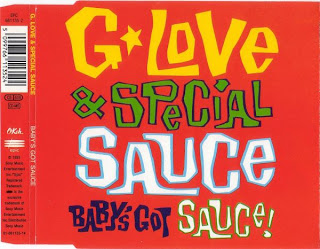 "Baby's Got Sauce" seems to have been one of Illadelphia [Philly] native Garrett Dutton's earliest and most widely-recognized "Hit Singles." The laid-back Blues track was pulled from G. Love & Special Sauce's self-titled debut long-player; Additional fan favourites from Album #1 include "Cold Beverage," "The Things That I Used to Do" (Guitar Slim), and "Blues Music." Interestingly enough, former-Roots member/record producer, Scott Storch is credited in the Additional Musicians section of the booklet insert - Piano Melodies.
Over the course of the next 15+ tears, G. Love would go on to collaborate with Popular artists like Jack Johnson, Dr. John, T-Ray, BRODEEVA, Donavan Frankenreiter, and most recently - The Avett Brothers (Fixin' to Die). The G. Love & Special Sauce Discography has since grown to include about 7 records and in 2009, they collectively formed Philadelphonic Records. Between 1998-2011, G. Love has also unleashed 4 "solo albums" [although they seemingly feature Special Sauce (band), as well]. "I-76," "This Ain't Living," "Stepping Stones," and the now infamous "Milk & Cereal" (viral meme) are often acknowledged as commercial successes.