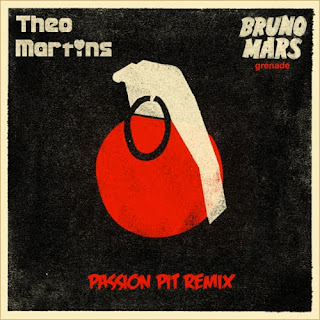 A good chunk of Bruno Mars' "Grenade" roots trace back to friend/collaborator Benny Blanco. The Virginia-native is [not so] famous for producing/writing material for artists including Ke$ha, 3OH!3, Katy Perry, Flo Rida, Britney Spears, and alongside Spank Rock as "Bangers & Cash." Blanco played Mars an early cut of the Andrew Wyatt (Miike Snow)-penned track. Mars felt like he could really relate to the song's heart-felt message, tweak it a bit, and carry it to another level.
A new Smeezingtons-produced version was recorded and a companion video was put together. While an unofficial Lil' Wayne "Remix" [Freestyle] has recently been making the rounds, the edit featured here was assembled by Passion Pit. The Cambridge, Massachusetts-based Electropop band's latest remix was included alongside other like mixes on The Grenade Sessions (Digital EP). Theo Martins, an underground Rhode Island MC, recently tacked a few verses onto said remix.


"Everyone's got that one person they've loved who didn’t love them back the same way. Eventually, your heart turns cold, because they won’t reciprocate. And that's that point of view I wrote this from. I always thought Bruno Mars song was amazing, but to hear what Passion Pit did to it, to take what was essentially a contemporary R&B record and make it into an Electro jam... It really inspired me."
- Theo Martins
Posted by Matt Horowitz at 8:45 PM