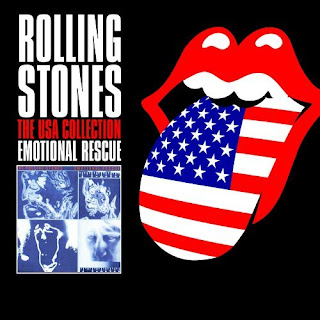 While listening to the radio (102.9 WMGK) the other night after work, an intriguing "Motown bass"-ified, Bee Gee's falsetto-reminiscent track filled the airspace in my car. After Google-ing a segment of the lyrics shortly thereafter, I released that I'd just heard The Rolling Stones' "Emotional Rescue." This made sense, as the Disco-influenced track DID indeed sound like it featured a hint of "Mick Jagger" on the hook... I never would have guessed that the musical backing was created by his bandmates.
Said track was the lead single from the similarly named 1980 Emotional Rescue LP. Like the rest of the collection, the lone "Disco track" was produced by "The Glimmer Twins" (a Jagger/Richards production pseudo-name).
The follow-up single would end up being "She's So Cold." A more recognizable Stones/Rock piece, it would end up being more "commercially successful" with many later "Greatest Hits" showcasings.