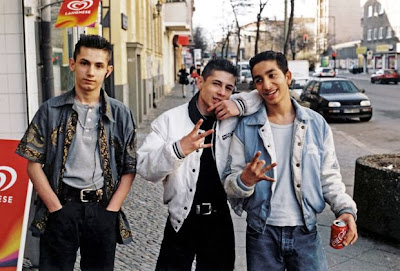 The Whendays' Facebook page categorizes Genre as "Dark Wave." This newly-formed Swedish/American duo consists of members Simon and Serge. The page also lists their Hometown/Current Location as Stockholm [, Sweden] and Panorama Bar [, Berlin] respectively.
Don't Die Wondering (an Altered Zones-affiliate), seemingly "broke" the band; The UK-based blog reported in a Feb. 11th article/post that Simon and Serge met on the Spring 2010 set of David Fincher's The Girl with the Dragon Tattoo. Fincher's adaption of the novel [and '09 Swedish film] is on track to be released Dec. 21, 2011 and will feature a score composed by Trent Reznor (NIN) and Atticus Ross.
While "Nam(n)los" is featured here and is seemingly being pushed as a "single," an additional track is highlighted on their Soundcloud page, as well as a Mixcloud "Secret Servant Mix." These 3 pieces make up the band's current out-put... Stay tunes for eminent word on a record deal,future releases, etc.