Kanye/Teachers & "All of the Lights" (Video) 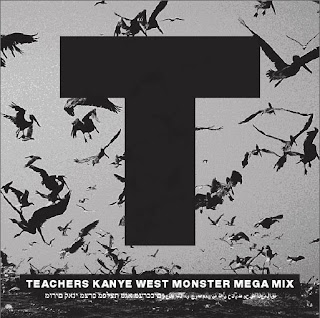 
Here, we have 2 newly-released audio/visual accompaniments to Kanye's 2010 magnum opus, My Beautiful Dark Twisted Fantasy:
Article #1, the "MONSTER" (Teachers Remix) was composed by Benjamin Bronfman and his band. Bronfman, M.I.A.'s fiance, had previously added some sort of "tribal vocal" touches to the album version. Now, after debuting "Gold" (single #1) on The Fader back in July, they've unleashed a re-tooled "MONSTER" edit. Teachers give the overall track a more [sophisticated] "Rock" feel, slightly changing musical styles with each featured verse, as the song progresses.
Article #2 is the music video for My Beautiful Dark Twisted Fantasy Track # 5, "All of the Lights." The Hype Williams-directed clip stars Mr. West, along with Rihanna and KiD CuDi. While the original cut featured roughly 11 various Popular artists, the video version seems to edit out some of the additional vocals. Between solo "performance shots" and apparent Michael Jackson references, the screen flashes between intricate colored lyrical designs and Day-Glo screencaps. The video's intro also [seemingly] showcases a homage to Gaspar Noé's 2009 film, Enter the Void - A segment which is backed by the "All of the Lights (Interlude)."