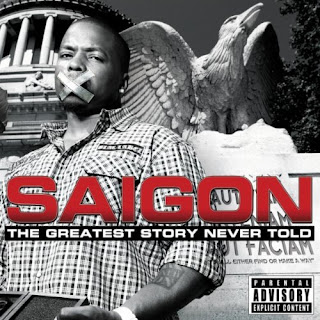 After years of eagerly waiting, Saigon fans world-wide can rejoice today; As his long-awaited debut is finally seeing the light of day. On this, the eve of The Greatest Story Never Told release, I present you this:
- A brief celebratory look back into Saigon's formative years. I had previously heard of the Brooklyn rapper (I remember when "C'mon Baby" was initially released back in '07), but was exposed more in-depthly as of recent. Along with the current round of promotional singles, I saw a batch of Saigon/Entourage appearances (episodes dating back to 2006). On the episodes, Turtle found a 4-track Saigon demo CD-R. Following a few meetings, Turtle became Saigon's [fictitious] manager; The song that hooked Turtle, as well as myself, was "Let a N---a Know." In released, said track appeared on Saigon's infamous 2004 mixtape/"album", Warning Shots.