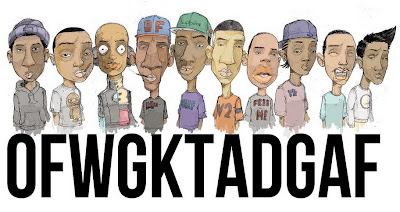 While The Witzard has previously done a few Tyler, The Creator posts... This is the first to contain [completely] original music.
- Brief Background: 19 year-old Tyler, The Creator is the "unofficial leader" of a Wu-Tang-like LA crew, Odd Future/OFWGKTA (Odd Future Wolf Gang Kill Them All). Other primary members include Hodgy Beats, Earl Sweatshirt, Domo Genesis, Mike G, Frank Ocean, Left Brain, The Super 3, Syd tha Kyd, Jasper Loc, and Taco Bennett, along with a handful of Killa Beez-style friends/affiliates. The DIY collective duals as a self-contained entity, made up of MC's, producers, and visual artists [all of whom are 16-23]. Since their 2008 formation, roughly 12 mixtapes/projects have been released between the 11 Odd Future members!; All of which have been released for free Online, becoming notably successful without any backing whatsoever from popular Hip-Hop blogs 2dopeboyz and NahRight.
A more in-depth post, highlighting the James Pants-approved crew will soon follow.

"Yonkers" (feat. above) is the newest OF-related track. It's being toted as the lead [iTunes] single from Tyler's second album, April's TBD GOBLIN. Seemingly his commercial debut, it may also include a poster an "deluxe packaging." The Wolf Haley (aka Tyler)-directed/produced clip showcases a sparse yet interesting semi-violent black and white video, accompanied by a cold-cut New York-style beat, and somewhat hostile rhyme schemes; When the visual fades to black, it indeed leaves the viewer wanting more.
Do yourself a favor and check out Tyler's highly-entertaining Twitter feed, as well as the wacky OF tumblr page. 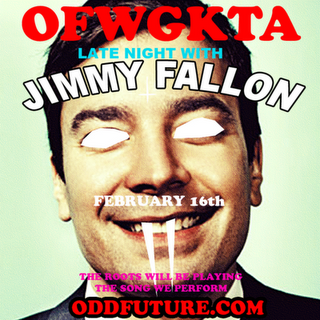